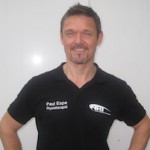 Paul studied physiotherapy at King’s College London. He graduated with an Honors degree in 1997. He is also trained in Acupuncture, Pilates and the Graston Technique.

He has gained a wide range of skills through post graduate courses and worked in many different areas of physiotherapy. He has worked in hospitals, private clinics, private businesses and with professional sporting events like English football, world cup in windsurfing, golf, athletics to mention a few. For the last 9 years he has had his own successful clinic in Norway.
For the last 7 years he has been specializing in a form of treatment called A.R.T – this means Active Release Technique. This is a patented, state of the art soft tissue system/movement based on a massage technique that treats problems with the muscles, tendons, ligaments, joint capsules, fascia and nerves.
Paul has been fine-tuning his A.R.T skills for so long, that he is now at a level where he is part of the “A.R.T. Europe Team” which is responsible for training other health professionals such as Chiropractors, Physiotherapists and Osteopaths.

We know that A.R.T  complements the chiropractic treatment, Redcord training and rehabilitation perfectly. Together with Paul on our team can offer you the best ‘Neuro-Structural-Correction’ which in return will ensure your body is working to the optimum level.